NASA's Lunar Reconnaissance Orbiter launched at 5:32 p.m. EDT aboard an Atlas V rocket from Cape Canaveral Air Force Station in Florida. The satellite will relay more information about the lunar environment than any other previous mission to the moon.

The orbiter, known as LRO, separated from the Atlas V rocket carrying it and a companion mission, the Lunar Crater Observation and Sensing Satellite. The LCROSS handoff is expected to occur in about two hours and 10 minutes.

* THE PLANETARY MISSION SENIOR REVIEW HAD RECOMMENDED THE EXTENSION OF THAT MISSION THROUGH FY17 AND FY18. *

Launched with the LCROSS Lunar Impact Mission, LRO is seeking potential landing sites and resources for future human exploration on the Moon. The orbiter will maps in high-resolution the surface and will try to detect potential sources of water-ice that may exist in the bottom of dark polar craters.

Image of the floor and the eastern wall of the Antoniadi crater. The image width along the wall is 40 km. Credit: NASA

Lastly, in using data from the NASA's LRO, scientists have identified bright areas in craters near the south pole that are cold enough to have frost present on the surface.

During its mission, LRO has discover that, the super cold temperature in the permanently shadowed craters in the south polar region is about -397 degrees Fahrenheit (-238 degrees Celsius). This is among the coldest surface temperatures measured in the Solar System.

Near the South Pole, NASA's LRO have found some bright and very cold areas, where water-ice may be present on the surface as frosty.

The icy deposits appear to be patchy and thin, and it is possible that they are mixed with the surface layer of soil, dust and small rocks called the regolith. The frost was found in cold traps close to the south pole. Cold traps are permanently dark areas, located on the floor of a deep crater or along a section of crater wall that doesn't receive direct light. In these regions, temperatures remain below -260 degrees Fahreneit (F), means that the water-ice can persist for millions or billions of years.

The actual focus of LRO is to characterize areas that spend most of the time in shadow and are illuminates for few hours to a few days over the 18-years lunar cycle. If these measurements show that the surface frosts change during and just after the illumination, this fact will provide new constraints for the transport of polar volatiles.

Each instruments on-board LRO contributes to understanding volatiles by probing different depths, from coatings on the surface to volatiles mixed within the first few feet below the moon's surface. To be able to do this, researchers will remote LRO's instruments with new operating modes. Then, a new mode for the ultraviolet instrument allows 80 times more light in it during day-side observations. That may lead to new understanding of the day/night variability of the ultraviolet water signature on the lunar surface.

The Lunar Reconnaissance Orbiter will also continue examining recent and ongoing surface changes and seek how the regoltih evolves overtime. In fact, it will studying the interactions between the Moon and the space environment, the solar wind and the galactic cosmic radiation.

Recently, the spacecraft has uncovered new evidence of surface frost in polar regions, where temperatures remain below -260 degrees F. Also, evidence of subsurface of hydrogen deposits has been uncovered by the LRO's radar and data from the neutron instrument. With this latter instrument, it has been possible to maps new concentration of hydrogen in the permanently shadowed regions, and around. The lightest water concentration being found inside the Cabeus Crater, a site in the Lunar South Pole.

The surface change in the time!

LRO's data indicates that the rate at which meteors impact the surface appears significantly greater than current models suggest. The re-imaging of sites captured by previous LRO camera-images under similar lighting and viewing conditions creates temporal pairs and enables the automatic detection of surface changes.

The data-set of over 14,000 image pairs, 6,6 % of the lunar surface, resulted in the identification of 33 % more impact craters larger than 10 m-diameter than models predict. Also, researchers identified over 47,000 discrete surface changes, without new craters.

* The Planetary Mission Senior Review recommended to extend this Mission by remaining at Ceres. *

*MISSIONS RECOMMENDED FOR  EXTENSION ARE:

First to Explore a Dwarf Planets

The spacecraft was launched in September 27, 2007, in the directions of Vesta and Ceres. They were chosen because, while both speak to conditions and processes early in the formation of the solar system, they weredeveloped into two different kinds of bodies.

Dawn is designed to study the conditions and processes of the solar system's earliest epoch by investigating in detail two of the largest protoplanets remaining intact since their formations. The orbiter targeted the giant asteroid Vesta and dwarf planet Ceres, two main asteroid belt worlds that followed very differently evolutionary paths.

Ceres, by contrast, has a primitive surface containing water-bearing minerals, and may possess a weak atmosphere. It appears to have many similarities to the large icy moons of the outer solar system.

Vesta is a dry, differentiated object with a surface that shows signs of resurfacing. It resembles the rocky bodies of the inner solar system, including Earth.

NASA's Dawn mission has found evidence for organic material on Ceres, a dwarf planet and the largest body located in the main asteroid belt between Mars and Jupiter.

The discovery has been make by the spacecraft's Visible and Infrared mapping Spectrometer (VIR) in and around a northern-hemisphere crater called Ernutet. Organic molecules are basically necessary components of life on Earth or another planet. 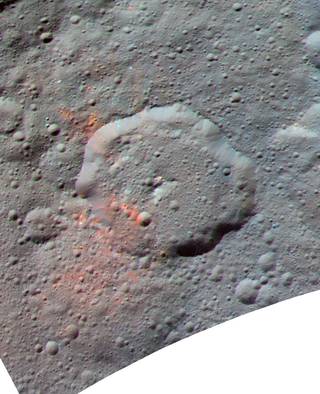 The bright red portions appear redder with respect to the rest of Ceres. This enhanced color composite image, made with data from the framing aboard Dawn shows the area around Ernutet Crater. Credits: NASA/JPL-Caltech/UCLA/MPS/DLR/IDA

Organic compounds has been found in certain meteorites as well as inferred from telescopic observations of several asteroids. Ceres shares many commonalities with meteorites rich in water and organics, in particular, carbonaceous chondrites-type.

Early images of Ceres revealed a heavily cratered surface and enigmatic bright spots. The mission has shown that clay-like minerals with only small areas of ice dominate the surface, which has scientists rethinking the formation and evolution history and the internal structure of this small world. The intense brightness of the persistent spots is due to the presence of highly reflective materials on the surface, which appear to be mineral salts and water ice.

Credit: NASA Jet Propulsion Laboratory / Published on 29 Jan 2016. Take a flight over dwarf planet Ceres in this video made with images from NASA's Dawn spacecraft. The simulated flyover was made by the mission's camera team at Germany's national aeronautics and space research center (DLR).

Why are some Spacecrafts missions extended?

The NASA Science Mission Directorate (SMD) conducts independent, comparative reviews of operating missions within each division to maximize the scientific return from these missions within finite resources. NASA uses the findings from the Senior Review to define an implementation strategy and give programmatic directions to the mission and projects concerned.

We can do it in using techniques of Aeroassit, which includes Aerocapture, Aerobraking, entry and Aerogravity Assist maneuvers.

So, when a spacecraft do many passes through the atmosphere of a planet with only small changes during each pass, that means passing from a larger eccentricity to a smaller, it makes Aerobraking maneuver.

During a single pass, the initial and the final states of the spacecraft are bound orbits at the primary. Today example of that it’s the Grand Finale of Cassini on Saturn planet in September 2017.

. The Fantastic Voyage of JUNO to JUPITER (Full Story)

. Psyche: Journey to a Metal World

.  LUCY MISSION: First visit to a group of Trojans' asteroids

. From a source of heat comes power to explore!